Today was another scorcher with rain and thunder.  There was probably lightning, too, but I don't look when I think it's out there.  Wimp, I know.

Did go to the gym.  I think it helps.  I consider it a waste of time, though, and away from my mini life.  LOL

So today I began on the macaroni boxes.  They almost look like a Barilla box.  I don't think they are.  And they are too small to read.

If you ever think you will make these boxes, I find it best to keep the large tabs for the closing of the box.  If they don't have tabs, make some.  The small tabs are more trouble than they are worth.

I can say my week will be these boxes.  However, I think I'll have to do something that is a little more creative.  I really began to shake as I finished 7 boxes. 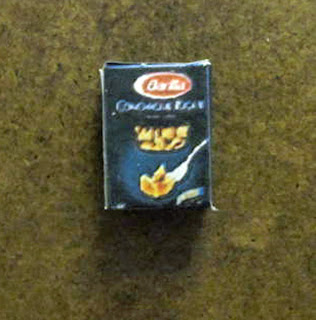 So here is the macaroni box.  All of the little things that appear to be wrong will be fixed.  For some reason, there's always white lines on these printies.  I will be taking a midnight blue marker to fix the edges.  And on the top, I need just a tad more glue.  That will be put in with a pin.

See you later with my next printie.


Posted by petitemoonbeams.blogspot.com at 8:45 PM