Rained so hard today but it wasn't snow.  But it teemed and the wind!  I didn't work today so we went to the gym.

As far as doing miniatures today, I worked on couches.  I showed you the couch I made from the quarter-scale book.  But as I was looking through my Pinterest file on minis, I saw these couches that I really liked.  I decided to try them my way.

I want all of the couches to be colorful.  And using mat board means it has to be painted or papered.  And I will make a few more of the first couch.  But I decided to use cardstock.  I have a lot of it in different colors.

So I measured it from the first couch and made the overall piece.  It included one piece that had both the back of the couch and the sides.  I love the sides.

I searched for something to use for the couch insides.  I found some foam pieces.  Too short, I used them anyway because I plan to cover the front.  The side gaps will never been seen. 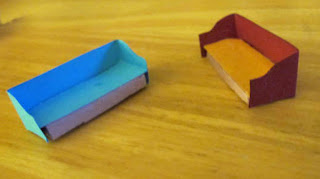 I haven't decided what to use for the front yet.  Perhaps a fabric?  Also plan to make little pillows.  These were not difficult to make but they were a bit messy.  I also want to trim the couches.
I am going to look for designed cardstock to make some, too.
﻿
﻿
I have to work tomorrow.  I am going to try more couches when I get home.
Until then...
Pat
﻿
Posted by petitemoonbeams.blogspot.com at 9:12 PM