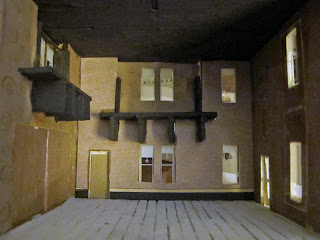 Hi. Didn't have a job today so I worked on the firehouse.  I decided to paint the ceiling brown.  Hubby said they didn't really do white ceilings.  Go figure.

I also decided to put a baseboard on the far wall.  Then I painted the things that stick out a chocolate brown.  Kind of looks like a hacienda at this point. 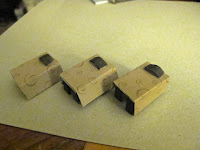 And then I couldn't help myself.  I started to play with making cots.  So I made 3 of them, complete with coverlet and a pillow.  Turned out well.  Then hubby said they do need foot lockers.  LOL  So that will probably be tomorrow.

I am looking to make a potbellied stove for the sleeping quarters.  So I found some things a Lowe's tonight.  I have to look up how to paint white pvc pipe.  The items didn't come in black.

I also need to make a set of stairs.  Hubby said they couldn't go up the pole.  He's a riot.  Hmmm....  Speaking of the fireman's pole, I finished it.  Used a dowel.  Used gold paint with a bit of black in it.  Looks good. 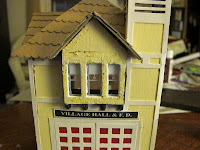 Because the original building materials included "trim" made from cardboard, it was beginning to get yucky.  So I took it off.  It took a while to get it off.  But once everything has the stone on it, I will put new trim on it.

Oh yes, hubby asked about a bathroom.  I forget about the details sometimes!

So enjoy the pix.  I think I will begin doing the brickwork tomorrow afternoon because it takes time to dry in between coats.  I have been looking at a video on how to do it so I will review it tomorrow morning after chores.  I figure a good several days for the brickwork to be finished.  I am going to try a chimney, too.  We'll see.

Posted by petitemoonbeams.blogspot.com at 8:16 PM