Meet the Mayor and other things

What a wet and cold day this Tuesday has been.  Brrr....  At least we had no snow.  It's not winter yet so technically, there should be no snow.  That's my theory anyway. 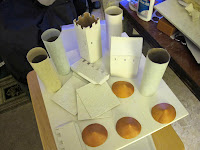 I set about making the turrets and the cover things for the castle.  Since I don't like the original layout of the castle, I am going to make it my way.  Are you surprised?  You shouldn't be!  I like to do things differently.

I ran out of Martha Stewart's textured stuff and went out to buy more.  Only Home Depot sells it around here.  No textured stuff.  Oh they had textured metallic.  But that is not the look I'm going after.  So hubby suggested a stucco spackle, which is about the same consistency and half the price.

I made the cute little turret caps.  I think they look like coolie hats.  I will be putting texture on the turrets tomorrow when I get home from work.

I do have a job for tomorrow.  Second grade.  It should be a good day. 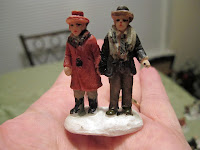 While out, I stopped at the Christmas Store and found a few little things suitable for the village.  Remember I said there would be a mayor and spouse?  I have a picture of them strolling down the street.  But they will look very, very different after I get my paintbrush at the ready!  I still don't know who is the mayor and who is the spouse.  LOL

I also have a few village people.  And I bought these street lights, too, which have a battery pack and light up. 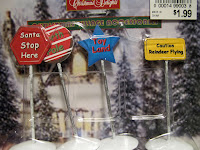 Also included in my purchase were these signs.  They had two packs and I bought both of them, 8 signs in all.  One crossing sign will be changed to Witch Crossing and one changed to Dragon Crossing.  The others will be changed, too. 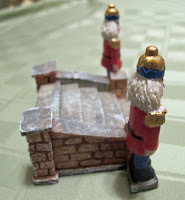 Another purchase today was a set of steps.  There are two guards that are supposed to resemble nutcrackers.  Since they aren't part of my village, they will be paintbrushed as well.  Or even taken off.  Haven't decided yet.


So, hope you enjoy the pix.  We'll talk more tomorrow!

Pat
Posted by petitemoonbeams.blogspot.com at 7:46 PM