Today was just beautiful with a little cold breeze.  I'm not much of an outside person so I usually don't know about the weather but I had to help hubby with the generator.  All is well.

I still don't feel terrific but I wanted to get some things done today.   Remember I said I made a mistake on the one window?  I am going to fix it by putting up a curtain over it.  Love curtains and all they hide!

I bought some E-6000 glue last night.  Whew!  Smells terrible.  Holds great but the smell is not pleasant at all. 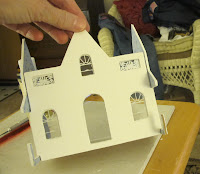 Painted the Victorian house, which is the 4th of the six buildings.  And I put the windows in.  I want to make trim for the inside of this building.  It needs it. Then I put the three sides up.

I checked the other buildings to make sure they are okay.  They are still standing so that's a good thing.  The pieces laying down are the backs of the buildings.  I keep the openings so I can work inside the buildings.  The backs will be used to keep the inside relatively clean and dust-free.


I am hoping to put the 2nd floors in on those with high roofs, probably next week.  I will only put 1/2 a floor, though, with 2 pillars to hold it up.  They will be the bedroom section.  Excuse me if I said this before. :)  Sometimes it helps to think out loud.

And now something to make you chuckle.  I heard a loud roaring sound and a loud puff.  I looked at Rowena, who was standing on her balcony.  She was looking at the plans for the village, which she is not happy about.  Well, there is this soldier, Commando Man, who really likes her.  She doesn't give him the time of day.  (Hubby thought he was funny and he bought him in the Dollar Store.) 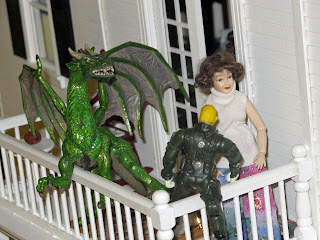 Commando Man usually climbs up the balcony supports just to talk to her.  She goes in and he leaves.  Well, today he tried again.  He has never had anyone stop him.  He put one leg over the rail.  Thus, the roar and the puff.  Mirelth decided to protect the fair Rowena.  Seems he and Rowena knew each other when the village was still active.  Commando Man is now in freeze mode.  Hubby, who is now laughing his head off, said Commando Man needs his trusty knife.  I said one puff from Mirelth and he's toast.  Rowena is not amused.  Mirelth needs to know that this is not medieval times.  (sigh)

Posted by petitemoonbeams.blogspot.com at 9:10 PM