Weather is still wet.  We are still in the doggies' house.  Today was a day for vegging.  I napped.  Hubby nodded off occasionally.  Talked to the grandchildren today.  The older child's team came in 2nd.  Tough because for two years they were the champs.

I am quite happy that I did not bring my sewing machine.  I would have worked on the boots today instead of resting.  Then I would be exhausted tomorrow. 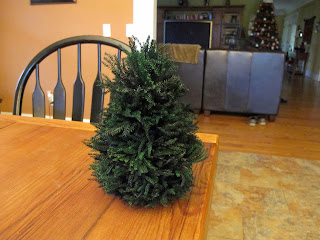 I finished the tree, which was a little bit of a challenge as I got closer to the top.  Not much room to place branches.  I did take longer branches and put them down as I went up.  I began trimming the bottom and part of the middle.  There is still a bit of trimming but I don't want to do too much.  But I do love it now that it's done.

There were some empty spaces. They were easy to fill with those branches that were removed from the large branch.  I did try to put a long branch on the top of the tree so an angel or star could be placed on it.  But it wouldn't stick.  I think I'll just put something straight, paint it dark green and leave it at that.  It won't be seen.

I want to make a tree stand now.  There is a small stand on the bottom but it doesn't hold up the new tree very well.  That will be my next project.

I have some ornaments for the tree and need garland, etc.  We'll see what the next few weeks bring.  The nice thing about a dollhouse is that it can be done whenever.  :)

So, here's the final project.  What do you think?

When I get home from work tomorrow, I plan to try it. I need to decide how to attach the new stand to the old one. (sigh)

Posted by petitemoonbeams.blogspot.com at 8:57 PM