Hi.  Cold and windy here in NJ.  Tomorrow it is supposed to snow all day but no accumulation.  I can breathe better when it's cold so I'm not complaining.  The weather is so strange lately, isn't it?

Hubby and I went out today and had tons of errands to run.  One of our errands was an excursion to a new place we just heard about.  This store sells individual packs of coffee for the Keurig coffee machine.  It is fabulous.  He buys the packages, opens them up, places them on shelves and you come in and shop.  There is every flavor of coffee, tea and hot chocolate.  It's reasonable and much cheaper than an individual box.  But more important, you can buy different types to try rather than buying an 18 pack and finding out you don't like it.  So I went crazy.  I tried a new coffee this afternoon.  Yum.

Then down to business.

When I had the girls over the other day, I noticed that they were drawn to making items from kits.  A lot of people work from kits rather than make things from scratch.  So I had a great idea:  create a series of patterns for the items that will be going in their roomboxes. 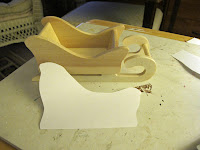 I began with something I am working on.  The sleigh, which needs some height.  I freehanded it and cut it out.  Tomorrow I will cut the cardboard for it.  I also cut out the seat section.  I think I know how I'll finish it.  It's a fun project. 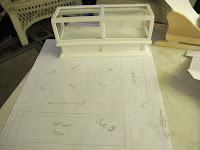 Then I started on the cabinets for the roomboxes.  The first one is the pastry cabinet.  I measured carefully and will cut the pattern out tomorrow.  I hope to use plastic in the areas that need it.  Sydney doesn't want sliding doors in the back so I'll just make holes for her hands.  I do think she will be using tweezers, though.  But like she said, she won't be changing cakes and such daily! 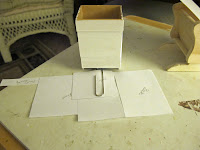 Then I have a few little cabinets I plan to make patterns for and cut them out of cardboard for both roomboxes.  This should keep me busy for the day.  I hope to cut them all out, too.

One thing that hinders me is the bandaged finger.  I'm having such difficulty typing.  I do think there should be a special finger protection when one is using an X-acto knife.  This poor finger has had this happen twice now.  Perhaps iron gloves might work....

It's late.  Time to crash.  Will concentrate on these projects tomorrow and show you tomorrow night.


Posted by petitemoonbeams.blogspot.com at 9:59 PM